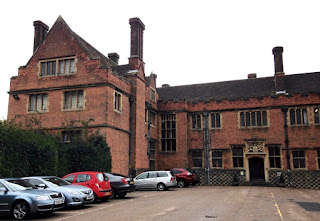 After being founded at the Putteridge Bury Teacher Training College in 1971, early G&S productions took place in the College Refectory during the October half-term holidays. The Society's growing reputation for high musical standards and witty productions meant it expanded beyond a College Society, drawing its membership from across three counties! Even when the Society moved its main productions to Luton Library Theatre (now St Georges), we still performed summer concerts at Putteridge Bury and rehearsed there until 1992. It was a great pleasure to work in such a beautiful building surrounded by lovely grounds. Here are some photos of ‘The Crowd’ from our 1978 Trial by Jury (performed at Putteridge Bury) and our 1980 production of The Pirates of Penzance at Luton Library Theatre.