Merry Christmas from all of us at PBGS! 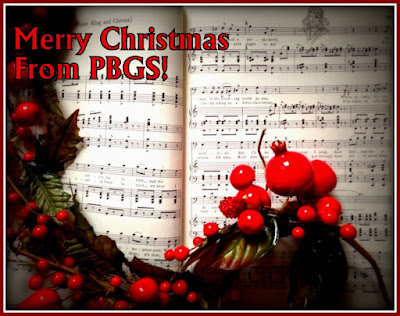 Have a wonderful Christmas and see you all in the new year for our sparkling production of The Pirates of Penzance!
at 11:27 No comments:

After our lively AGM on Tuesday, Santa Claus has been extra kind and brought PBGS a New Committee for Christmas and the New Year!

Thanks to everyone willing to stand (and in some cases stand again). And many thanks to our retiring Secretary, David Crew, and Committee member Nicole Santelmann for all their hard work and commitment.

The AGM was a cause of celebration, Anne and Tony Critchley were unanimously re-elected as our Presidents (no getting away now...) and three long serving and valuable PBGSers were made Honorary Life Members. We don't know where we'd be without Clive Wheeler, Paula Fraser and Richard Fraser, so many congratulations from all of us. You deserve it so much after years of working hard for us all.