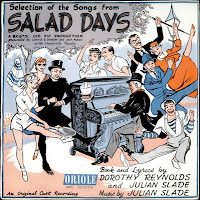 Just to remind everybody that we start rehearsals for Salad Days on Tuesday 7th May at 7.45pm at Streatley Village Hall. If you are thinking of joining us for the first time you will find details and a map here.

Durning this evening you will meet our production team, gain an overview of the show and get an introduction to the music for the show. It is the sort of show that needs principals, supporting roles, cameos and speaking parts so everyone has a chance to shine - or be in the chorus as well with lots of songs and scenes - and as much dancing as you want!

We hope to have all the audition pieces selected and available to view on this evening so you can have a lot of time to get familiar with the music and dialogue. Additional audition music rehearsals are planned to assist you all with this. Audition night is set for Tuesday 21st May.

Full details on obtaining scores and librettos are on our Notices Page.

As you can see from the post below this one, Salad Days is a very funny and lively show which I'm sure will be a lot of fun for everyone involved. See you all on the 7th!

Our next Production: Salad Days 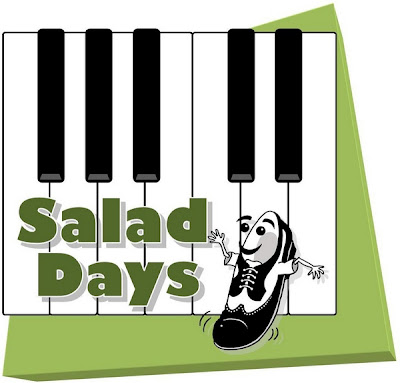 Our Autumn 2013 Production will be the effervescent Salad Days, by Julian Slade and Dorothy Reynolds.

Julian Slade and Dorothy Reynolds wrote Salad Days as a "summer musical for the Bristol Old Vic's resident company", taking their title from a quote from Shakespeare's Antony and Cleopatra: "My salad days, When I was green in judgement...". It opened in June 1954 at the Theatre Royal, Bristol, and proved so popular it moved to the Vaudeville Theatre, London, where it run for over 5 years. At the time it was the longest running musical in the history of the British Theatre. Containing all the optimism of the 50’s and some of its quirkier aspects, including the appearance of a topical flying saucer, the show bubbles with fun, song and dance and quick-fire humour.

Jane and Timothy are friends who meet up after graduation to plan their lives. Not sure what to do next and also not sure if they are actually in love, but hopeful that they will be, they decide to get married in secret. Jane’s parents are desperate for her to marry someone suitable and Timothy’s parents want him to ask each of his four influential uncles for a job. But Jane and Timothy decide that having solved the marriage question, Timothy should solve the job one by taking the first offer to come along. Fate can’t resist an opportunity and a passing tramp offers them £7 a week to look after his piano for a month while he has a holiday, but the piano has a secret - when it is played it gives everyone within earshot an irresistible desire to dance! They christen the piano ‘Minnie’, but the inappropriately named ‘Minister of Pleasure and Pastime’ tries to ban the disruptive music, which even has policemen and bishops dancing. When Jane and Timothy decide to hide Minnie, they discover that the piano has vanished. Rather unexpectedly, Timothy’s scientist uncle Zed turns up in a Flying Saucer and they enlist his help to try and find it.

The Tramp reappears and Jane and Timothy discover he is actually Timothy’s fifth uncle, the one the family never mentions. So Timothy has received help from an uncle after all, and not in the way his parents would have approved of! Their month of looking after the piano is up, the piano passes to another young couple, and Jane and Timothy optimistically look forward to a life of happiness together.

We will be performing Salad Days from  9th - 12th October at the Queen Mother Theatre in Hitchin. If you would like to take part, learn more about the production or enquire about booking please contact us.

A thank you to our all our audiences! 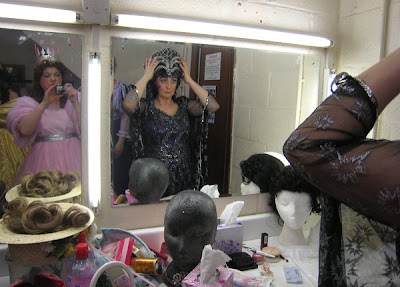 Our wicked Queen dons her crown ready to terrify the jury

PBGS would like to say a big thank you to all our audiences for coming along to our Triple Bill performances this week. From all the laughter we know that you had a really good time! We all had a hugely enjoyable week and appreciate all the support you give us. A big thank you, also, to everyone on stage and behind the scenes who made this possible. A production like this is a huge amount of work and we have some very dedicated members.

Our next production will be Salad Days - more on that coming soon - but for now we'd like to invite any of you who fancy taking part, both on stage or off, to contact us. Rehearsals start on May 7 at Streatley Village Hall. Give us a call or email us if you would like to learn more, or simply come along to our rehearsals and introduce yourself. If you are not a singer, but would like to be involved, we would love you to come along and help. We always need backstage, front-of-house, props, scenery or costume help. Not all the team treads the boards, but everyone has a really important part to play. We are a very friendly and fun society so you will receive a warm welcome. 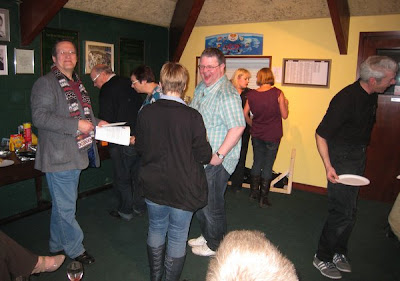 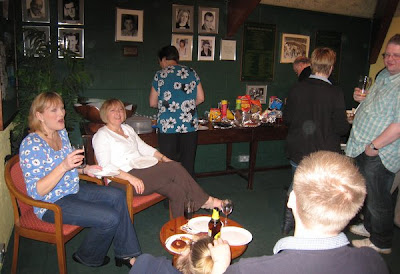 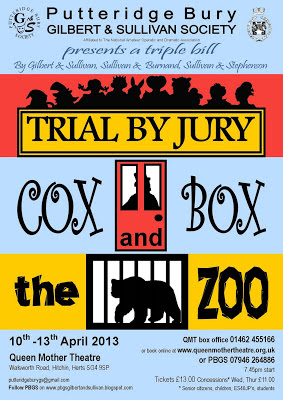 Our Triple Bill opens tomorrow (hoorah!) and we are really looking forward to presenting our three one act shows to you all. There are still tickets available for every night and you will find full booking details here and at the end of this post.

Over the last two weeks we've been telling you a little bit about our first two shows - Cox and Box and The Zoo. We can promise you a wonderful evening culminating in our third presentation – Trial by Jury. But be prepared to be surprised as you will never have seen a Trial like this one! Directed by Alison Gibbs, who produced our Noda Award Nominated Patience last year, it is full of invention and a visual feast. Angelina and Edwin have been banished from this production, to be replaced by a disappointed Cinderella and a Prince who is not so Charming. Is there a fairy-tale ending? Well... you’ll have to come along and see!

We have D’Oyly Carte to thank for the original Trial by Jury. He had Offenbach’s popular, but rather short, La Périchole playing at the Royalty Theatre, but the Box Office wasn’t doing too well. Ever astute, Carte knew he needed a curtain-raiser to fill the bill and attract audiences that expected a much longer entertainment for their money. The same day that he was mulling over the problem, Gilbert happened to walk into his office. Carte mentioned his difficulty and Gilbert told him that he had expanded one of his Bab Ballads into a full musical based on a mock trial. It was called Trial by Jury, and he hoped Carl Rosa was going to write the score.

Carte had one of those flashes of insight that make history and suggest Sullivan write it instead. The pair had written Thespis together, but Carte saw past the failure. He believed that their partnership had real promise. At Carte’s request, Gilbert took the script to Sullivan, Sullivan finished the music in a fortnight and the rest is history. It opened to unanimous praise and ran for 200 performances.

There are lots of ways to book your tickets. You can book online at the Queen Mother Theatre Website, or you can ring their Box Office on 01462 455166. The theatre box office has limited opening hours so you are encouraged to leave a message on the answerphone for them to get back to you. If you want to order directly through PBGS then please contact Ketina on 07946 264886 or email us at putteridgeburygs@gmail.com. Please also contact us directly if you'd like to make a group booking. 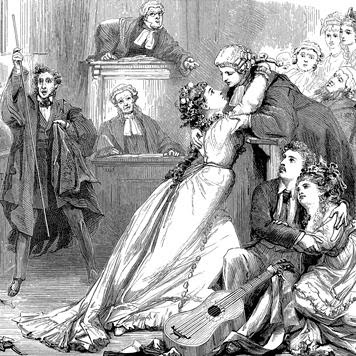 The original production of Trial by Jury

Source: Gilbert and Sullivan and their World by Leslie Baily