Ruddigore: a matter of life and death and bad taste 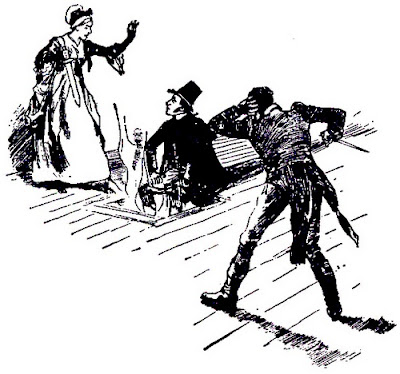 Roderick's entrance through the trap door
After Ruddigore's mixed First Night reviews, Gilbert made several changes to his production. While the original title, Ruddygore, created a furore amongst those who thought that it unsuitable for the ears of Ladies, there was another aspect of the first night which raised accusations of bad taste. A anonymous letter, signed 'A Savoyard' was sent to the editor of the St James Gazette complaining that "The love-scene between Hannah and the ghost of a man who has been ten years dead produced an uncomfortable impression.... it is a grisly idea; it is not funny; and it is in doubtful taste...". Ah, the sensibilities of the Victorians. Imagine if he'd seen The Rocky Horror Show.

The comment, along with accusations that Act 2 lacked pace, resulted in several changes - Sir Roderick no longer returned at the end by popping up through a trap door and surrounded by red flames, removing that demonic air which made his entrance to startling. The ghostly ancestors didn't return at all, but reappeared as the gentry of the first act (begging the question, what on earth were they doing there?) and a substantial amount of Hannah and Roderick's dialogue was cut altogether, losing, alas, Hannah's wonderfully tasteless line "But I should be the wife of a dead husband, Roddy!" It was generally agreed that the swifter conclusion picked up the pace of Act 2. But I would have loved to have see the original 'grisly' version.

Ruddigore contains a LOT of dancing and Paula has choreographed some wonderful moves for us. Do you know your 'meeting and greeting' from your 'ins and outs'? Are you creating arches when everyone else is going in circles? Help is at hand. Check out the Notices Page for downloadable PDFs of the moves and never bump into anybody again. On the first night of Ruddigore at the Savoy, the end of the Act 1 Finale was so well received that it was actually encored, so I assume they had to perform their dance twice! 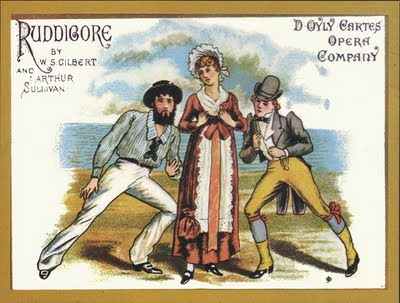 An original Savoy Theatre publicity card
We are now in the last stages of putting our production of Ruddigore together and things are really starting to shape up. This is going to be a very funny production with an excellent cast, and a chorus excelling themselves at mastering the choreography of the long dances which Sullivan wrote into the score. Margaret is Mad, Despard is Bad and our Chairman will be getting Very Dangerous to Know if we don't start selling more tickets. This is going to be a terrific evening of comic melodrama (Gilbert gives us carte blanche for some serious over-acting!) and some of Sullivan's best music, so start filling out those booking forms. Tickets are available through members - who can obtain them during rehearsals from Ketina - or they can be booked direct from:

Sasha Regan's all-male Iolanthe is now running at Wilton's Music Hall and has gained a good review from Michael Coveney of The Independant:


'...director Sasha Regan and her boys are doing something just as gloriously fresh and inventive as Matthew Bourne did with Swan Lake, or Richard Jones with Annie Get Your Gun at the Young Vic.

And it's not necessarily radical, in a "conceptual" or vindictive manner. Above all, it's not camp or knowing. Sentiment is pure and humour affectionate, which takes some doing with the slightly arch nature of the story, in which a stage full of fairies and peers squabble over the Victorian romance between a chap, Strephon, who is only a fairy "down to the waist" and a shepherdess who is a ward of Chancery. An all-male chorus of fairies are genuinely charming and funny in their improvised costumes of corsets, vests, cami-knickers and wings of bunting and silk strips.'

Iolanthe runs until the 7 May and you will find more about it here.

Aesthetic Movement Exhibition at the V&A 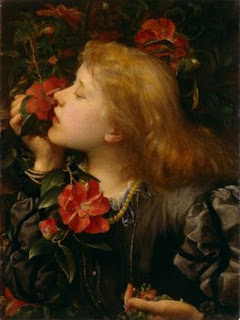 © National Portrait Gallery
Patience.... what's that all about? Well, if you have always been wondering, wonder no more because the V&A has a wonderful new exhibition The Cult of Beauty: Beautiful Dreamers running from now until the 17th of July.

The Independant has an interesting article about the Aesthetic Movement and the Exhibition on their website here.


'....as captivating as this cult of personality proved to be, their peacock feathers and long-haired loftiness also left them open to ridicule, together with stories of decadence and complicated amours. As the years went by, they were attacked for being a narcissistic, pavonine and self-regarding group that was prone to excessive foppery.

Satirical ribaldry against them emerged in the form of cartoons in Punch and in Gilbert and Sullivan's opera Patience. Calloway says this cloud of disparaging humour did "slightly puncture the grandeur of the movement". A young Oscar Wilde, still a student at Oxford at the time, came on board the movement to counteract the negative publicity after being asked by the theatre impresario, D'Oyly Carte, who was promoting Gilbert and Sullivan's opera, to undertake a series of lectures in America so the nation would understand the opera's many contemptuous references to the movement. Wilde spent a year lecturing, giving 300 talks and travelling a thousand miles to spread the word. His efforts paid off: aestheticism became well understood in America.'

You will find full details about this fascinating exhibition on the V&A Website.