Advance booking is now open for Salad Days and you can reserve your tickets by email by clicking on our shiny new Order Tickets button on the top right of this page, or by ringing us on 07946 264886. Watch this space for the launch of full online booking when the Box Office opens! 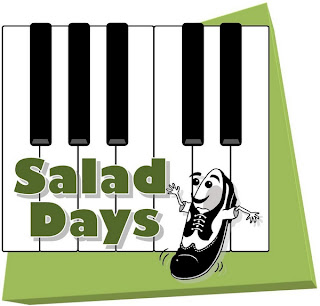 PBGS performs in the West End!! 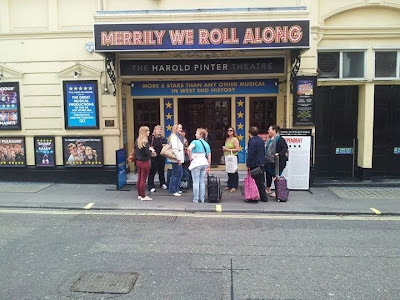 On 25th June, six PBGS performers, one Musical Director and 2 Wolverton G&S performers - with a technical Chairman - headed to the Harold Pinter Theatre in London's West End. Given one weeks' notice by the BBC's "The One Show" to perform the opening chorus from Iolanthe, we dragged the costumes out of the garage, choreographed the number, organised 2 rehearsals and gathered as much fairy dust as possible!

On arrival we were greeted by Jake - the (very relieved) One Show Researcher - given the bar to change in (no, it was locked), given fairy lights to wear - which involved Richard ferreting around down the backs of fairy costumes - and headed onstage. By 2.30pm we had done two run-throughs with Margaret at the helm - we increased the amps as we can be a bit loud when we all get together and hearing the keyboard was a problem!

We were introduced to Kate - the Director, and Marty - the Presenter and the filming began. After about 10 takes of the whole number, with the camera following various people or taking wider shots of the whole company, we repeated the ending several times to fit in a special surprise. Thankfully there were some breaks for water and rest whilst the technicians moved the camera, but it was great fun and less stressful than being live! By 4.15pm we were done - 45 minutes early! And we headed off to Prezzos for some well earned refreshment and to rest some weary fairy feet.

And all of us can say we have performed on a West End Stage!!

The performance was being recorded as part of the story of why Fairy lights gained their name, and the broadcast date is yet to be confirmed - watch this space for further details... 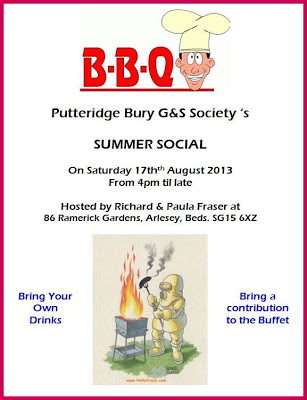 The sun has got his hat on and let's start hoping it lasts until August for the PBGS BBQ! Bring along offerings for the buffet and Richard's cooking skills, a bottle, sunscreen, wasp swatters, fleeces and umbrellas (you never know) and your good selves, 17th August, 4pm - til Paula falls asleep in the fireplace.