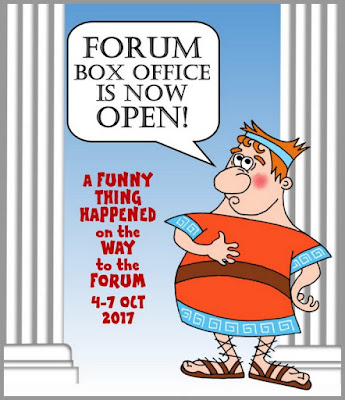 The Box Office is now open for our fabulous production of A Funny Thing Happened on the Way to the Forum.

Forum is a madcap, hilarious romp by Stephen Sondheim and is pure Roman farce, made into a successful film in 1966 staring Zero Mostel as the Roman slave Pseodolos - "the lyingest, cheatingest, sloppiest slave in all of Rome".

Sondheim’s uproarious tribute to ancient Roman theatre and classic vaudeville follows crafty slave Pseudolus as he seeks to win his freedom by helping his hapless master woo the virgin courtesan next door who has, unfortunately, been promised to another suitor.

Hysteria ensues with a nagging wife, a war-drunk soldier and stolen twins! Filled with mistaken identities, clever wordplay, and slamming doors, Broadway’s favourite musical farce stands the test of time, combining fast-paced, irreverent humour with witty, upbeat music to deliver “something for everyone, a comedy tonight!”

Book your tickets now direct from The Queen Mother Theatre, Hitchin by clicking wherever you see our BUY button.