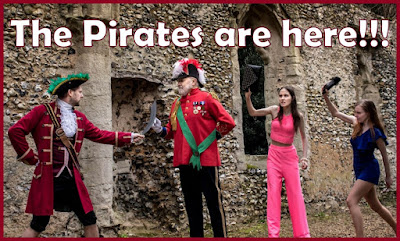 Opening Night! Break a leg everyone and get handbags at the ready because the Pirates are here! Don't miss this hilarious production by Richard Fraser where Essex meets Pirates meets the Cornish Police and mayhem ensues.

'Having become an apprentice at the age of 8 to a bunch of useless Pirates, Frederic reaches his 21st birthday and swears to leave them and lead a blameless life – which means he will have to kill all the Pirates. As he leaves, he promises to marry his nursemaid, Ruth (47) until he sees other female faces in a bunch of Essex Girls on a day trip to the beach. Picking Mabel, he meets her father, The Major General, who pretends to be an orphan to escape from the pirates who want to run off with all his daughters. The Pirates are also all orphans and let them go, but they find out about the lie and head to Penzance to take revenge on the Major General, taking on a terrified Cornish Police force, despite the girls pleading for mercy. Until a secret is revealed by Ruth….'

All this week including a Saturday Matinee at the QMT Hitchin. Still a few tickets available for every performance, but they are going fast!