Some of our PBGS members are over in Wolverton this week in Ivor Novello's Valley of Song which is being put on by Wolverton G&S: 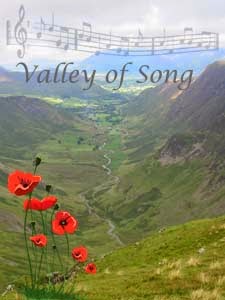 'Wolverton Gilbert & Sullivan Society are proud to present Ivor Novello's very last musical, Valley of Song, playing from 10th to 12th of July 2014.
Left unfinished at the time of his sudden death, and completed by his longtime collaborator Christopher Hassall, Valley of Song is a unique opportunity to see a rarely performed Ivor Novello work upon the stage.
Set in a world of optimism on the eve of the Great War, Valley of Song is a homage to Wales - Novello's homeland - and a touching farewell to the music of his youth.
The Welsh Valleys, 1913. Nan Brewster is the largest landowner in the valley and supports the local valley choir, run by choirmaster David. David's love for Lily, his leading soprano, creates beautiful music for the choir. But when Lily is given an opportunity to sing in Venice, she jumps at the chance, and into the arms of Ricardo, a wealthy count set on making her an international star. But, by opening night, it becomes clear that Ricardo's intentions are not entirely honourable... As Europe is plunged into the First World War, how much is David willing to sacrifice for the woman he loves?'