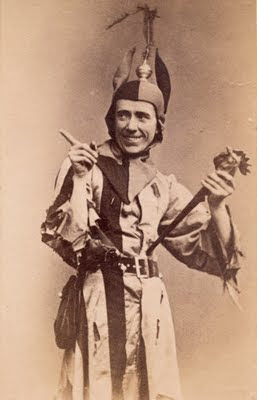 Grossmith as the original Jack Point
The Buxton Festival has prompted an article about The Yeomen of the Guard on the BBC News Website. It's worth reading for its interesting take on Sullivan and Jack Point, and audience reactions to the operetta's ambiguous ending:


'It is 100 years since WS Gilbert died, aged 74, 10 years after Arthur Sullivan. From the 1870s to the 1890s each of their comic operas in turn had captivated a huge public across the English-speaking world.

Ever since, they have been a sure way to fill venues from opera house to tin shed. This year's Gilbert and Sullivan Festival in Buxton is the biggest ever, with some 50 productions.

But who was the driving force in the partnership? Was it Gilbert, the writer of sparkling lyrics with a sting in the tail? Or Sullivan, the master orchestrator and creator of unforgettable tunes?

Part of the answer lies in their oddest opera, the one where they went "serious" - the Yeomen of the Guard of 1888....'

Read the full article over on the BBC News Website.

Email ThisBlogThis!Share to TwitterShare to FacebookShare to Pinterest
Labels: Gilbert and Sullivan, The Yeomen of the Guard