It's our 50th Anniversary!

Welcome to PBGS's 50th Anniversary Year! It's not going to be quite the year we were hoping for, but watch this space as there are plans afoot. In the meantime, here is a nostalgic look back at our 21st and 40th celebrations (somehow we missed 30)!

In 1992 we celebrated with a special concert and a meal. I've posted the programme so you can see what we sung - we certainly covered the whole repertoire! In 2011, for our 40th, we took The G&S Sketch Show, written by our current Chairwoman, Paula Fraser, to the International G&S Festival in Buxton, performing at the Pavillion Theatre as part of the Festival Fringe. It was a great afternoon and very well received, if somewhat hectic! We also performed it in Hitchin with special guests and a dinner.

Hopefully, although our current celebratory plans have had to change, we will still be able to bring you a staged production of The Yeomen of the Guard next October (we have all our collective fingers crossed). And before then we will have a surprise for you!

We miss seeing you all in the theatre. As a group of dedicated G&S and Musical Theatre fans, we can't wait to entertain you once again. 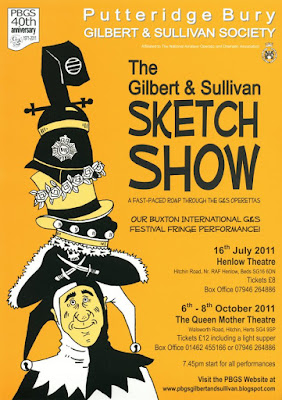