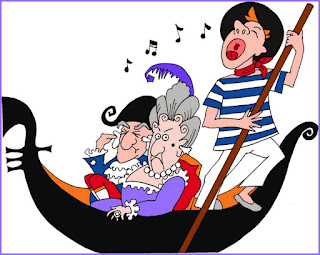 Time to get down to casting our next show! Gondoliers auditions are on Sunday 5th November from 3pm at Streatley Village Hall. For those who can't make that date, there will be an opportunity to have your audition videoed after our rehearsal on Tuesday 31st October. This will be viewed by the auditioning panel on the Sunday along with the other auditions.

You will find all the audition information you need here.

Audition forms need to be handed in to Paula no later than 10pm on Tuesday 31st October and auditionees need to be members or pay an audition fee in advance.

We are performing The Gondoliers at the Queen Mother Theatre in Hitchin on 21st - 24th March and again at the International Gilbert and Sullivan Festival in Harrogate on Thursday 9th August at Harrogate Theatre. We will be opening the Festival! Please specify if you can do either or both as we are auditioning for Hitchin and Harrogate at the same time.