Salad Days: 'Nobody ever saw such a saucy saucer'

There are many unexpected landings in Musical Theatre - Miss Saigon may have a helicopter and Phantom of the Opera a crashing chandelier, but Salad Days has, of all things, a Flying Saucer. Salad Days premiered in the UK at the Theatre Royal, Bristol in June 1954, and the saucer – a real saucer complete with teaspoon - would have delighted 1950’s audiences who would have all been caught up in the growing popular interest in science fiction and UFOs. When Timothy’s Uncle Zed unexpectedly arrives in a Flying Saucer with his telepathic friend Electron from the Planet Zed, the two protagonists, Jane and Timothy, find themselves airborn, 'looking for a piano' while taking a pop at pulp science fiction.

The term ‘Flying Saucer’ was a generic name given to any unknown flying object, coined in 1947 by American newspapers which were filled with the sighting of nine saucer shaped objects by pilot and salesman, Kenneth Arnold. Arnold described the objects as being like ‘saucers’, ‘discs’ and ‘crescents’, and ‘a fish flipping in the sun’, but mainly he described them as being like ‘pie-plates’. Somehow ‘flying pie-plates’ doesn’t have the same ring to it (though it would have worked very well in Salad Days!). The newspapers ran with ‘saucer’ and it became the popular term for the phenomenon, even after the US Air Force officially called them Unidentified Flying Objects, or UFOs, in 1952. As it says in the Saucer Song from Salad Days:


It might have been a flying plate,
Or perhaps a flying dish,
A flying cup or a flying spoon
Or even a flying fish.
But of all the many things that fly
By Nature or by Art
You’ll find a flying saucer
Will get off to a flying start.

Flying Saucers entered a popular pulp literature already full of extra-terrestrials, robots (culminating in Asimov’s nine science fiction short stories, I, Robot) and outer-space adventures. But they really imprinted themselves in the minds of the public in black and white B movies. Only three years before Salad Days the 1951 American science fiction film, The Day the Earth Stood Still, was released. Directed by Robert Wise, it contained an impressive saucer landing, Michael Rennie lending a bit of acting clout as extra-terrestrial, Klaatu, and a suitably scary and silent robot, Gort, wielding a impressive death-ray. The film seized the popular imagination and the mood of the time with its anti-atomic and anti-war message.

All great fun for a Saturday night with popcorn but not, of course, as comfortable and homely as Uncle Zed in his real flying saucer, steered by Electron with a giant spoon. All that and great music too! 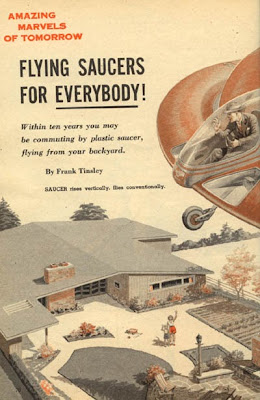