For he is an Englishman 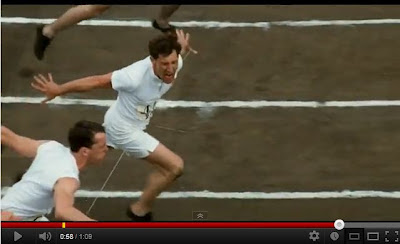 What has the Olympics got to do with Gilbert and Sullivan. Well… not a lot, but with the Olympics only a hop, skip and a jump away I have managed to find a connection – 1924 Olympic Hundred Metres Champion Harold Abrahams. You will remember him from the 1981 film Chariots of Fire which, with excellent timing, has recently been given a new lease of life as a new play

If you remember the film (which is also being re-released in British cinemas this month), you’ll remember that Abrahams was a huge G&S fan and was a member of Cambridge Gilbert and Sullivan Society while studying at Caius College. Along with plenty of Vangellis, the film had 5 G&S tunes in the score, including “For He is an Englishman” from HMS Pinafore. In the film his fiancée is wrongly depicted as D'Oyly Carte singer Sybil Gordon, shown singing Yum-Yum, a role which she never actually played. In reality Abrahams married mezzo-soprano Sybil Evers, who sang small roles with D'Oyly Carte in the early thirties and who he met a decade after his triumph at the Olympics. As a mezzo, she never played Yum-Yum either. A muddle of identities which would have made Gilbert proud. At least they were both called ‘Sybil’ and film goers got a chance to sample some G&S!

As well as being a G&S lover, Abrahams was born locally in Bedford!

If you like Gilbert and Sullivan with your Olympics and are interested in the new play which tells the story of both Abrahams and Eric Liddell, Chariots of Fire premièred in May at the Hampstead Theatre and moved to the Gielgud Theatre on June 22. The run continues until November 12. You will find a selection of reviews here and booking details here.  There is even an on-line trailer for the play.