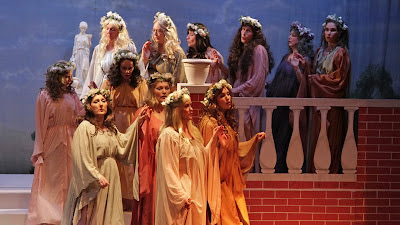 Our thanks go to our Noda rep, Nova Horley, for this wonderful Review of our May Production of Patience. Well done everyone!

'A thoroughly entertaining production, the humour was to the fore, aided in no small amount by the adoption by Paula Fraser of a broad Brummie accent!

The story as always with G&S is slightly tenuous, but there were some lovely OTT character studies, and the ladies chorus singing beautifully, whilst the men’s chorus were strong and authoritative as befits the Dragoon Guards.

The set was nicely thought-out, very solid and well-used by the cast. There were no surprises with the lighting which was suitable for the show and sound was good.

Margaret Johnson had created exactly the right sound from her small band – they accompanied well, and the balance between singers and band was good, but they came to life in the overture which was lively, and extremely musical in quality.  I just feel it is a shame that the band had to be in the middle of the stage, with the MD encroaching on stage space – I wonder if there would be room to place the band slightly to the side, with the MD at the far side facing the middle, which would give an almost uninterrupted view of the stage – as with cast sitting, lying, kneeling on the stage the audience sometimes miss some of the action.

The placing of the ladies for the first number was a little suspect, we had ladies on the floor and on seats who were totally obscured by other ladies, the stage isn’t big, but there was plenty of room to place everyone so that they could all be seen.

Mostly the costumes were good, they looked fresh and the Dragoons all looked very smart.   I loved Bunthorne’s gold outfit and Grosvenor’s green number! The only two costumes that were slightly out of kilter were the Major’s grey velvet suit, which showed a large expanse of bare flesh, which could have been solved by wearing a white T-shirt tucked into his trousers under the white shirt, and the young Bunthorne’s green trousers were definitely in need of pulling up with a pair of braces, and his white socks/stockings were seriously creased – which spoiled the look of the ballet, as the young Patience’s costume was so pristine and charming.

Paula Fraser was a very funny and lively Patience, injecting the optimum fun into her musical numbers and lib.

Tim Sell again created a lovely OTT Bunthorne, the lusted after poet – his facial expressions were very good and added much to the performance.  He also moved well, and kept the bounciness of his character going throughout.

Richard Fraser as Grosvenor created a very saucy character, making use of his eyes to convey so much, a very telling portrayal.

The three officers of the Dragoons, Richard Dean as the Major, Graham Gibb as the Duke of Dunstable and Peter Davis as the Colonel, complemented each other well; although I heard some pitching problems at times.

Sue Wookey was a super Lady Jane – Sue always gives us a good portrayal, and this part suited her voice well, and gave her scope to be amusing as well; another person with a very expressive face.

I liked the three ladies, Angela, Ella and Saphir, played by Margaret Snape, Eve Rapley and Alice Bridges – they gave contrasting portrayals, and their voices blended well. Again they really brought out the humour.  I also liked the number with Patience and Angela, their voices sat well together, and were musically secure.

In the main the ladies wigs were excellent – I particularly liked those of Patience and Jane.

The ballet was nicely choreographed, and created a new dimension whilst not detracting from the song.  It was imaginative, and nicely danced, with one small comment to the dancers, look out for sickled feet in the lifts and jumps, however the arabesques were good from both dancers, and the lifts accomplished well.

I was pleased to see a full house, which is very unusual for these days, and everyone appeared to enjoy what was a fun and uplifting production, Alison Gibbs had done well, and injected her cast with enthusiasm which projected to the audience.

Thanks to PBGS for the hospitality and another good evening’s entertainment.'

Congratulations to everyone involved with our PBGS production of Patience, especially our Producer, Alison Gibbs and our MD, Margaret Johnson. A lovely end to on all that hard work (although it never felt like anything but fun!). 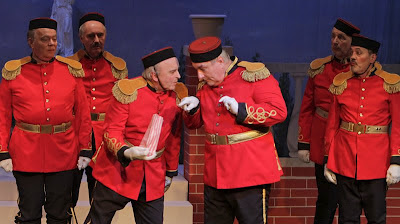